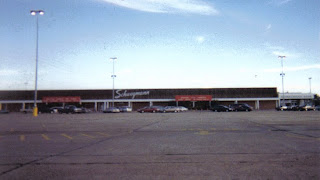 A tradition that began in 1869; Schwegmann Giant Supermarkets were a place for New Orleaneans to "make groceries". Schwegmann started as a small grocery store and became the largest grocer in New Orleans. Some of the stores built in the 1960's such as Harvey and Algiers had mini-malls attached to the store. Some of the stores such as the Old Gentilly Rd location had businesses in the front of the store just like the Wal-Mart superstores of today. Schwegmann became the largest grocer in the New Orleans area and acquired the National Food store chain in the mid 1990's. Since Schwegmann had a near monopoly of the New Orleans market they were forced to close seven of their acquired stores. The acquisition also put the company into financial trouble and the chain was purchased by Kohlberg and Co after 127 years in business. The chain only lasted a little more than a year after the takeover and closed all the stores in 1999. The Schwegmann stores were known for their low prices and huge selection of store branded items. Fiesta Markets in Houston are very similar in layout and merchandise selection to the Schwegmann Giant Markets in New Orleans. Some of the old markets have been converted to different brands, but several have been abandoned or demolished. 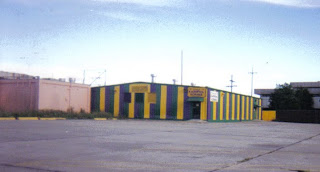 Here is another shot of the Schegmann in Metairie at Vets & Division Street. This store was demolished in the early 2000's and replaced by a Lowe's home improvement store. 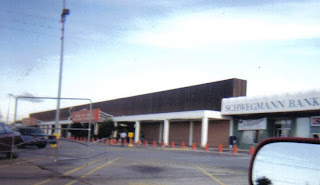 Email ThisBlogThis!Share to TwitterShare to FacebookShare to Pinterest
Labels: Schweggmann