The Pasadena Montgomery Ward at 2222 Spencer Highway opened in 1966 and has two floors and an attached auto center.
Here are some facts about this retail relic.
The sign for the store can be seen in the movie Urban Cowboy.
This store contained a Bargain Center that was moved from the Northline Mall Montgomery Ward in 1990.
The store was mentioned in a news article about the company bankruptcy but survived the 1997 closures. The store closed in March 2001 with the rest of the company after 35 years in business.
Here is a thread on the HAIF forum discussing Montgomery Ward stores in the Houston area.
The store was redeveloped into a flea market in the mid 2000's, but the second floor is closed to the public. The inside of the store still has most of the original paint, floors, and even signage from the Montgomery Ward days. The flea market has gotten smaller since it originally opened with new developments taking store space. The Pasadena and Palms Center Wards stores are from the same era and both are now flea markets.

It is amazing that this sign is still up in the middle of an active flea market. 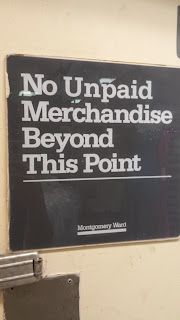 The old floor is mostly intact throughout the store. This I believe is part of the former auto section. 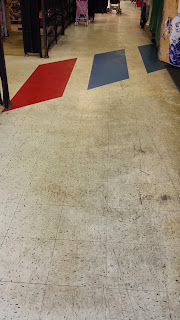 This store has a second floor so one can only guess how it looks up there now since the ceiling tiles are stained on the first floor. 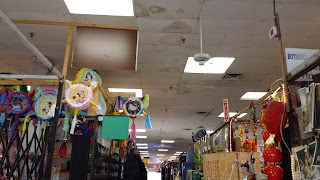 The next three photos are from either the Boy's or Men's department of the store. This whole section of the flea market has now been walled off for a new development with an outside entrance only. 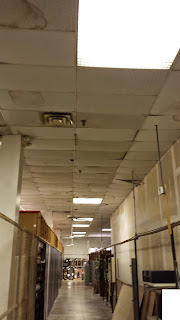 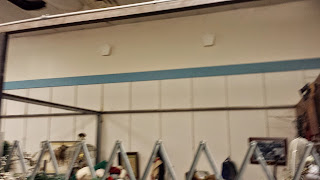 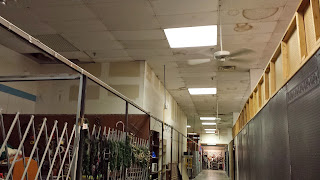 The exit near where Women's fashions were once located. The wall color remains the same as before but the "Gracias Por Su Patrocinio" is a new sign. 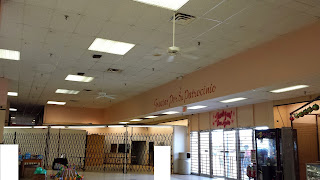 Most of the former Montgomery Ward stickers are still on all of the entrance doors around the building. This store was open long enough to advertise Wards.com on the bottom of the right door. Notice the MW door handle as well. 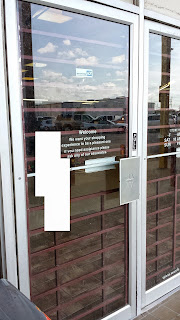 Here is the view of the store from the Spencer Highway entrance. 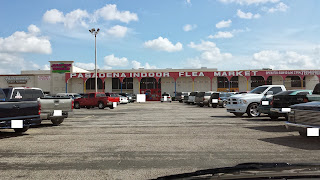 The view from South Shaver. 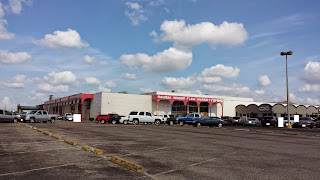 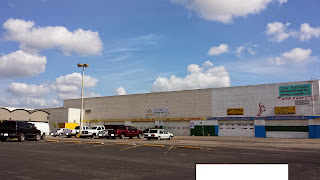 A close up of the Wards.com stickers on one of the entrance doors. 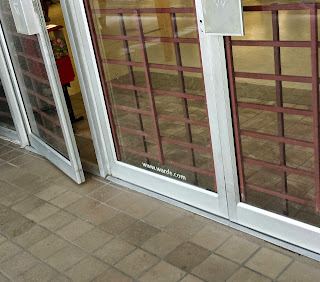 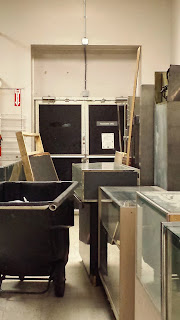 More entrance doors there are several around the building. 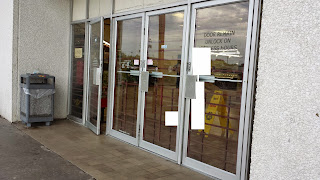 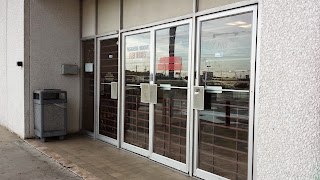 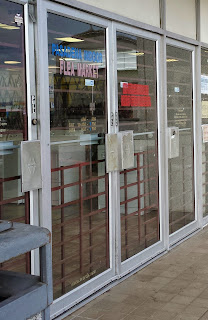 A wide view from across the street. As you can see from this picture, the second floor did not stretch across the entire building. The store may have been expanded at some point, but it is difficult to tell since booths are covering up most of the space inside of the store. 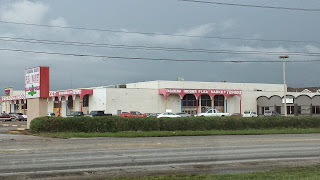 Here are a few major proposed malls that never were never built in the Houston area in the 1980's through 1990's. There were also many other projects during this time period that failed including the Deauville and Buyer's Market Malls which opened in the mid 1980's at the peak of the recession. There are no images for any of these developments online except for the most recent Katy Mall proposal. If anyone has any further information about these malls or photos of the any of the proposals submit a comment below.

Southbrook Mall 1986
Southbrook Mall was announced in August 1986. The mall was to be 800,000 square feet with 4 anchors and developed by the same company (Homart) that developed Willowbrook, Deerbrook, and Baybrook Malls. The location of the mall was to be at the Northwest corner of Almeda Genoa and Hwy 288. The Southbrook development was to be on 165 total acres of land with homes and the mall using 83 acres of the development. The only anchor that would have for sure been part of the mall was Sears since Homart at the time was part of the Sears financial network. This mall would have been comparable to any one of the 1980's era Homart malls. This project likely had issues with funding due to the terrible late 1980's economy of Houston. This site is still a wooded area waiting for development.

Williamsburg Mall 1986
Williamsburg Mall was announced in October 1986. The mall was to be between 800,000 and 1,000,000 square feet of retail space hosting 4 to 6 anchors by Homart Development. The site is North of 1-10 between Peak and Mason Roads on 110 acres of land near Mason Park. DeBartolo initially planned a mall at the site in the early 1980's but those plans also fell through. Sears would have more than likely been an anchor at this mall as well since they did not have their store at West Oaks Mall yet. This project also likely had issues with funding due to the terrible late 1980's economy of Houston. See Katy Mall below for an update on the site.

Copperfield Mall 1986
Copperfield Mall was announced in 1986 to be located at Highway 6 and FM 529 (Southwest corner) on 100 acres by the Herring/ Marathon Group. The initial plans for the mall were for 6 department stores. The mall was delayed in late 1986 and was still planned into the early 1990's. Not many more details are known about the 1990's plan for this mall and it would probably have been built similarly to the Mall of the Mainland. Herring was involved with the San Jacinto and Mall of the Mainland developments. The Copperfield Mall site is now filled with Big Box stores.

Conroe Mall 1987
Conroe Mall was announced in December 1987. Edward J. DeBartolo was going to develop the mall at I-45 and Texas 336 in Crighton Park (Southeast corner) development by Friendswood. The mall which was planned to open in 1991 was to have five anchors and over 1 million square feet of retail space on 115 acres. This would have been the first DeBartolo development in the Houston area. The nearby Woodlands Mall which was originally scheduled for construction in 1982 and a 1984 opening was still in being planned in 1987 by Homart Development. The competition was fierce since there would not be enough people to support 2 nearby malls and the first project to get started would be the winner. The Woodlands Mall project by 1989 had signed on Sears, Dillard's, and Mervyn's came on in the early 1990's which killed the Conroe Mall project by February 1992. The property is still mostly undeveloped with some houses and is still listed on Loopnet as commercial property.

Bluebonnet Mall 1989
Bluebonnet Mall was proposed in February 1989 along with a racetrack named Bluebonnet Downs, hotels, and offices. American B/T/R Inc. was the company behind this proposal. The site was at Hwy 290 and FM 1960 at the Northwest corner. Very little information on this development is available, but the neighboring residents were fighting this proposal and wrote to the Texas Racing Commission to create a one mile buffer between the proposed racetrack and their properties. This proposal sounded like a pie in the sky type of proposal and financing was probably also an issue. This property is the location of some restaurants and small offices but is mostly wooded.


Katy Mall 1995
Katy Mall was announced in November 1995 by a joint venture names Interfin. The Katy Mall was to be on the same site as the Williamsburg Mall proposal on a portion of 727 acres at the Grand Parkway to just West of Mason Road North of I-10. In late 1995 Houston Premium Outlets was proposed for this site instead of the Katy Mall which was going to be a traditional regional mall. The Katy Mills project was also announced in 1997 and construction began in 1998 which more than likely killed the outlet portion of the project. Katy Mills at 1.6 square million feet versus 360,000 to 800,000 square feet for this proposal. JCPenney, and some other retailers moved into this site in the late 1990's and 2000's but the property is still being slowly developed. Here is a photo of the 2009 version of the proposal which shows an outdoor mall instead of the indoor mall initially proposed.

Commonwealth Mall 1997
Commonwealth Mall was proposed in December 1997 for the Southeast corner of I-10 and the Grand Parkway just South of the Katy Mall/ Houston Premium Outlet site. The 90 acre site was going to be developed by the Commonwealth Development Group which developed several Northeastern US malls. Foley's signed a letter of intent at this mall, but no other department stores were mentioned. In April 1998 this site was purchased by John Beeson who shopped the site to several national mall developers, but plans for a mall were cancelled. This mall was likely also killed by Katy Mills which had many traditional mall stores as well as outlets. The site was subdivided and has an Academy and other businesses.

Here is a revisit to the Marshall Mall and more photos. Not much changed from the first visit to this mall, but there was a mini market event in the center of the mall which made it hard to get pictures of the middle of the mall.

Looking from the mall entrance of JCPenney into the mall. 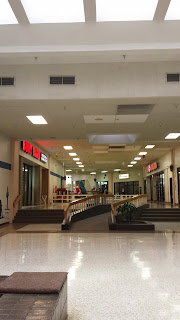 The mall entrance to JCPenney, the Musicland store in the Skateland movie is the store to the left of the JCPenney entrance. 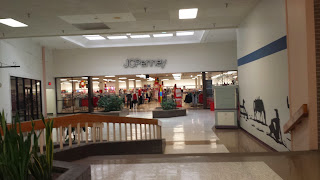 The entrance to the former Kmart. 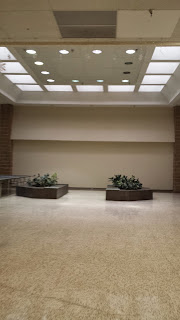 This appears to have been a former bar/ restaurant. 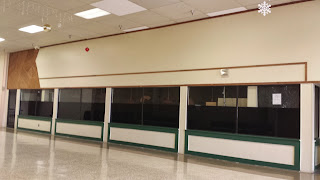 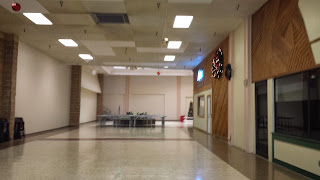 Looking from the front of the former Kmart into the mall. 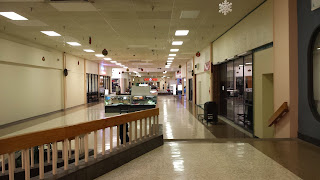 A blurry photo of the center entrance to the mall which goes to Bealls. 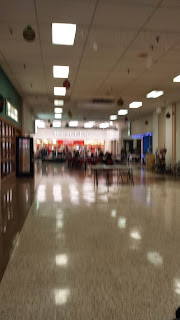 An interesting sports store at the middle mall entrance. 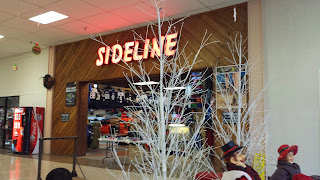 The entrance to the mall and former Kmart. 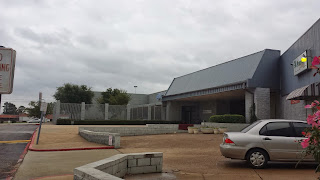 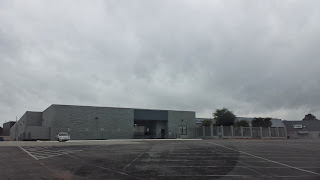 A wide view of the mall from near the former Kmart entrance to JCPenney. 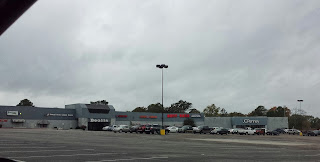 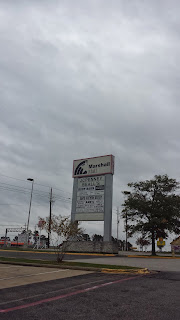